When I was a child the White Wolf Fault, a splay-fault of the great San Andreas, ruptured about 60 km (40 miles) from my home. I recall hearing a bang, then hearing the windows rattling hard – and finally breaking. Shortly afterwards, I was thrown out of bed onto the floor. I didn’t fall out of bed, I was thrown from my bed to the middle of my bedroom floor. When my mother called to me from her bedroom to come to her (she was trying to hold onto her own bed at the time), she told me that I replied “I can’t. The walls keep hitting me.” On our hands and knees we finally made it as a small family out to our back yard (my Mom was fearful of the gas line rupturing and suffocating or burning us all). This earthquake had a moment magnitude of about 7.3

The movie “Volcano” made the expression “The Coast Is Toast” famous. “Volcano” postulated a volcano somehow under the San Andreas Fault. When the film came out, my volcanologist colleagues cringed. While volcanoes ARE associated with faults, they are associated with deep subduction faults, where ocean floor is over-run by a continent in what is called a thrust fault. Think of the Cascades range, far inboard from the Cascadia subduction fault 50 – 100 kilometers offshore. The volcanoes themselves are found far inland from where the huge subduction fault reaches the ocean floor. 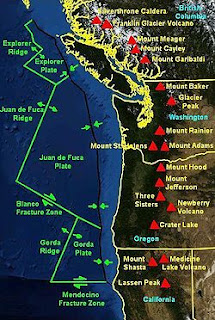 However, the expression “The Coast IS Toast” is not that far off the mark in the sense of massive destruction that could visit the Pacific Northwest coast if and when a Cascadia subduction event occurs. It could be a magnitude of 8.0 or 9.0 or even higher – this would represent over 100 times more energy released that what woke me up many years ago. 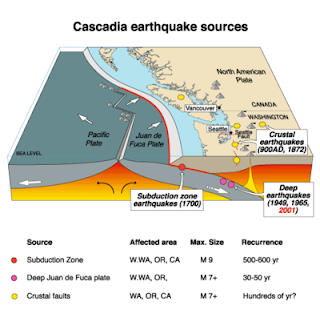 The Cascadia Subduction Zone (CSZ) is just that: a plate-subduction thrust fault spread over a 1,000 kilometer length, extending from offshore Vancouver Island in Canada to offshore northern California. It’s width depends on what you count, but earthquake imaging of the down-going oceanic slab extends well into central Washington and Oregon. Three major oceanic floor plates, the largest being the Juan de Fuca, are being over-ridden by a westward-moving North American continent. Part of the thrust fault is lubricated by the ocean-floor sediments atop the Juan de Fuca plate, and part of the down-going slab is partially melting in the upper Mantle, giving rise to that almost linear string of Cascades volcanoes. These volcanoes extend from Mt Garibaldi in British Columbia to Mount Shasta and Mount Lassen in Northern California.

But in between these parts is a segment, extending the entire length of the fault zone, that is stuck. The lubricating fluids have been squeezed out by pressure with increasing depth, and the stuck part is like a dry patch in the center of your hands as you try to slide one past the other. THIS is where the the rub lies, so to speak. In 2004 a similar subduction fault near Aceh in western Indonesia ruptured, creating a magnitude 9.3 earthquake. The tsunami alone killed over 250,000 people around the Indian Ocean as far away as Mozambique. When a similar subduction fault offshore of northern Japan ruptured in 2011, the surface area of the fault that was displaced or ripped was enormous: 300 kilometers long by 200 kilometers down-dip. This is important, because the surface area ruptured correlates closely with the energy released. “Down-dip” on the San Andreas Fault is only about 10 kilometers – because this fault is more or less vertical, and the rock becomes plastic at about 10 kilometers depth.

There is a security camera video of a 15-meter (50′) wave breaching the 5-meter (16 ft) tsunami-protection walls of the Fukushima Dai-Ichi nuclear power plant on the NE Japanese coast. If you’ve been trying to body-board in the ocean, you know how hard a 2 meter (6 foot) wave can slam you. To state the obvious, you don’t just stand your ground with even this small a wave: water is nearly as dense as your body. The estimated cost of this disaster to Japan as a nation is now in excess of $300 billion.

That sounds unimaginable. However, a Cascadia Subduction event is a very real, in fact inevitable, likelihood for the Pacific Northwest.

What will happen when this inexorable event occurs?

The coast will lurch westward 20 meters (60 feet)… and remain there permanently.

The coast will drop down on average 2 meters (6 feet)... and the low-lying parts will remain sunken permanently.

A tsunami up to 40 meters (130 feet) tall will strike coastal communities in as little as 15 minutes from the onset of the first shaking.

There will be fires that are unstoppable – because gas mains and water mains will both be ruptured. The 1906 earthquake in San Francisco was over in probably less than 3 minutes… but the fires that destroyed nearly ALL of San Francisco raged for four days afterwards. The fire department at the time was helpless – they had no water.

The closer to the epicenter – a broad north-south line just off and beneath the coast – the greater the damage. The farther east you live, the greater the attenuation of the energy released by a CSZ event. Attenuation means the Earth’s crust in between the fault and, say, Yakima, Washington, will absorb most of the radiating seismic energy.

But first, the ground will suddenly jerk westward, then begin going up and down and sideways, then it will begin rolling. This will go on for 4 – 6 minutes…

It will definitely wake you up. From experience, I can tell you that a few minutes seems to go on forever.

How often does Cascadia’s fault rupture? An early study of bouma sequences (mud layering in deep-ocean coring) suggested 7 events in the past 3,500 years, so we might say an average is 500 years between mega-events. However, a recent report by Oregon State University suggests that the average time between major earthquake events may be as little as every 240 years. When was the last one?

This event gave rise to the Orphan Tsunami in Japan, so-called because there was no felt earthquake nor approaching typhoon to provide warning before enormous waves suddenly appeared and obliterated or damaged many fishing villages along the Sendai coast. That’s over 300 years ago. This is somewhat simplified, of course, because the CSZ cannot really be treated as a single entity that always behaves along its entire length the same way. Detailed geologic mapping, in fact, suggests that there are sometimes separate ruptures along the “northern zone” and the “southern zone”… giving ‘mere’ magnitude 8.5 events.

But make no mistake: while a magnitude 8+ event may feel different from a magnitude 9.0 full-rip event (lasting “only” 4-5 minutes instead of 6), there will still be widespread damage.

The event spacing (the average of 240 years vs. the current hiatus of 315 years) suggests we are then “overdue”, doesn’t it? Not necessarily, because the spacing between previous events has been as much as 500 years. Earthquakes do not click along like clocks. In fact, we cannot predict earthquakes unless we are injecting water into wells in a tectonic region like the area north of Denver, CO. or in southern Oklahoma. For all large earthquakes, despite upwards of $100 billion spent on research over the past century, the best minds I personally know unequivocally say that current science cannot predict when an earthquake will happen.

But scientists can forecast major earthquakes. That’s a very different thing than a prediction. This means that scientists can say, based on existing data, that there is a 40% chance of another Cascadia event in the next 50 years. So… less than a 1% chance in the next year. Buy earthquake insurance or not?

What can that plausibly mean to you – realistically, practically? What can you possibly do with this information?

First, scientists CAN make reasonable estimates of what will happen during and after a Cascadia event, and you and I CAN prepare for those. This is going on right now in local and state organizations in the Pacific Northwest. Infrastructure is being examined with an eye towards what can be reinforced. Building codes have already been upgraded – then upgraded again – to help us create new roads, bridges, and buildings that will better survive such an event. There are estimates in Oregon, for instance, that a majority of bridges will be compromised or fail on coastal US Highway 101, and at least five bridges on inland interstate I-5 will fail in Oregon alone. The damage will be worse the closer one is to the coast, but in both instances it takes just one bridge in a strategic location to shut down interstate commerce. Don’t count on being able to find food on the shelves of your local supermarket for awhile… or even count on being able to GET to your supermarket. Repairs to powerlines, gas lines, roads, bridges, etc. will take time. They will happen sooner inland, and take longer in the coastal communities.

This means you should have at least 2 – 4 weeks worth of non-perishable food for each adult in your household. You should have at least two gallons of water, per day, per adult, enough to last you that whole time. A majority of people planning for a disaster forget about the water part – it’s raining all the time in the “Pacific NorthWet”, isn’t it? You should also have batteries – LOTS of batteries. A hand-crank radio will be very helpful, perhaps a lifeline. I have an FCC-issued HAM radio license and two small but powerful hand-held radios. If cell towers are down, I will be part of a local Amateur Radio Emergency Services network to help move information around from my neighborhood to the region.

Most important of all, you need to have a family plan for dealing with this – or any other catastrophe. In the short term, only you can help your family and your neighbors. It will take awhile for the country as a whole to martial the necessary resources to even partially help. Having a 72-Hour Go Kit will be appreciated when you need it.

If the example of Hurricane Katrina can be used, yes, we will recover. However, the recovery effort will consume much of the region’s GDP, and it may be more than a decade before everything is running as smoothly as before the event. New Orleans and Memphis, TN, had similar economic output in 2005. by 2015 New Orleans still has not caught up with Memphis.

We will survive. We will rebuild. We will be toast only if we refuse to do anything.