Some questions begin with a profound basic misunderstanding – but people are still trying to make sense out of their world, so I am grateful that they even ASK the questions.

Q: At the age of 40 I am slowly figuring out geology just because I’m curious.

One of the things that caught my attention in Dr. Robert M Hazen’s The Story of Earth is that the mantle is green: peridotite, olivine, perovskite, etc. That surprised and delighted me, because introductions to Earth science tend to show the Earth in cross section with a lava-colored mantle and core.

But when lava erupts, it is usually reddish orange. What happened to change it?
Is it interaction with water from subducting slabs of ocean floor? Is it because repeated melting has allowed some of the heavier elements to sink away instead of reaching the surface, changing magma’s chemical composition? Has it oxidized, in which case the Moon’s maria and other airless objects in the solar system might’ve been green when they were molten? Or is the lava that erupts on the surface  from some other source than the mantle?
Thanks for answering our questions. An answer I got from you many years ago helped start my geological journey (I asked whether there could’ve been continents on the other side of the planet from Pangea that had subducted; you explained that continental rock is less dense than ocean floor so it doesn’t subduct. Hazen’s book helped me understand WHY it’s less dense.)
Regards,

A: Good on you for actually thinking about these sorts of things.
SOME mantle-derived rocks are green at the surface because they have significant chlorine content. However, Kimberlites, the long tubes that reach down to 100+ km depths and bring diamonds to the surface of the Earth in places like South Africa, South America, and Arkansas, are famous for being blue in color. It just means different minerals (like chrome diopside) dominate in Kimberlites. Many other mantle-derived rocks are black or gray – and often weather to brown, hence the origin of the name for one rock-type: dunnite, after the color dun originally used to describe certain beige-colored cows.
These colors are all what you see at ambient temperatures that exist at the surface of the Earth. However, the deeper you go into the Earth, the higher the temperatures are – this is the geothermal gradient. It’s sort of like a biscuit coming out of the oven: the outside quickly cools and chills to a crust, but bite into it too soon and the inside will burn your mouth.
When you see a red or yellow color in magma, it’s because of the TEMPERATURE. This is black-body radiation, a basic physics principle. I’m attaching a photo of me next to what we informally called the “Cookie Monster” in Hawai’i. 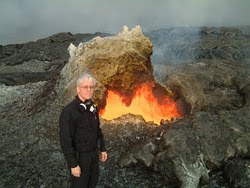 The black-gray structure is a Hornito – basically a lava splatter-cone. The glowing “mouth” is a Skylight – a hole broken into the top of a lava-tube. We have used a police speed-gun to measure the speed of the lava running past and beneath this skylight: it was moving at 40 km an hour (25 mph). The whole thing collapsed about a month after that photo was taken, by the way – not a good place to be standing.  The grimace on my face is because the air temperature where I am standing was above 60 C (140 F). That blue cloud to my right is H2S gas, which engulfed me just after the photo was taken. My gas mask was on me at the time – but not adjusted to my face – and it turned my nose and throat mucous membrane fluids into sulfuric acid.
Translation: my nose and throat felt like they were on fire, and I took off running to get away from the cloud.
The colors you see correlate with temperature: red is centered around 4,000 K and yellow is centered around 6,000 K. You may have seen the dull red in a toaster: same thing is happening.
If you could actually “see” rocks at the 30 – 50 km depths where this lava arose from, they would be yellow or even blue-ultraviolet at deeper depths.
Hope this helps you “see” (understand) the different reasons for rock colors.
~~~~~

2 thoughts on “Red Rocks and Green Rocks and Blue Rocks…”